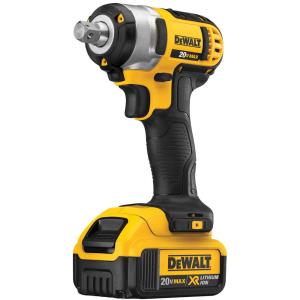 Good things come in small packages with the DeWalt DCF880HM2 20-volt MAX Lithium-ion 1/2-Inch Impact Wrench Kit — it’s cordless and compact, but with plenty of power to spare. Thoughtfully engineered, it’s loaded with features and can tackle your toughest needs at home or on the job site.

The kit comes complete with not one, but two 20-volt long-life batteries, a charger and a durable carry case at a price that’s almost too good to be true. Rotate your car’s tires, install new brakes and maintain your lawn equipment — you’ll save bundles of cash with this little tool that can do it all and is one of the best compact impact wrench on today’s market.

A: The DCF880HM2 is rated for150 ft./lbs. — half of the so-called “maximum” of similar brands. But while ratings of “up to” 300 ft./lbs of torque sound impressive, the maximum rate is rarely achieved. Users say the torque on this model is consistently equal to or better than the competition.

Q: How much does the wrench weigh?

A: With the battery attached, it weighs 3.4 lbs. That’s up to a pound less than similar models for hours of use with less arm fatigue.

Q: What’s the difference between a hog ring and a detent pin?

A: Budget impact wrenches use spring-loaded detent pins to keep sockets secure during use. The mechanism is reliable, but it requires significant hand strength or a tool to change sockets. Hog rings eliminate that, using only friction and compression to create a tight hold.

DeWalt tools are among the professionals’ favorites. They’re consistently well engineered for both performance and comfort, and the DCF880HM2 is no exception. The features reflect what tool users say they want most in cordless equipment — plug-in level power and reliable battery life at an affordable price.

By the numbers, this compact wrench offers less maximum torque than other models in its class, and it’s not designed for heavy-duty use, yet it performs as well as the competition. Why? Because it’s so compact and maneuverable that it makes users’ technique better, even in tight spaces — it never feels unwieldy in your hand. If you could use an impact wrench but worry that it’s too much tool for a home garage, the DeWalt DCF880HM2 is the ideal choice.

The DeWalt DCF880HM2 Impact Wrench Kit features a 1/2-inch hog ring anvil for quick and easy socket changes. It offers a capable 150 ft./lbs. of torque and up to 2700 impacts per minute for consistent medium-duty performance.

It’s compact and ergonomic, weighing less than 3.5 pounds assembled — with a comfortable textured grip, it feels secure in your hand. The variable speed trigger delivers up to 2700 RPM with no buttons to push while three front-mounted LED lights shine a beam where you need it most. A 20-second shutdown delay timer lets you grab loose hardware before they dim.

You can expect hours of run time from the premium 4.0 AH batteries included with the kit. Power doesn’t fade as the charge dwindles, and the fuel gauge indicator lets you see when the battery needs recharging. Use the same pack to run any tool from DeWalt’s 20-volt MAX System — it’s 200 products strong and growing. DeWalt backs the DCF880HM2 Impact Wrench Kit with a three-year warranty.

Maintaining the DCF880HM2 impact wrench is as easy as keeping the air vents clean — it requires no lubrication. Store batteries in a dry area out of direct sunlight where temperatures don’t exceed 104 degrees Fahrenheit — 65 to 75 degrees is optimal. Charging the battery in temperatures below 40 degrees can cause damage. Packs should be wiped free from debris before being placed on the charger.

The problem with hard-hitting equipment is that it’s intimidating, especially for first-time users. Anyone with a kitchen full of unused small appliances knows that tools are only helpful when they’re easy to use and dependable — if you’re not comfortable using them, you won’t.

What I like most about the DeWalt impact wrench is that it feels like a natural extension of your hand, even if you’ve never used one before. It’s full-featured and intuitively designed but not complex, and it’s powerful but not aggressive. Plus, the kit is budget-friendly with two batteries that seem to last forever and a three-warranty. It’s a stress-free purchase.

The DCF880HM2 is a little light on maximum torque. I emphasize “maximum” because while similar models claim they offer more, “up to” thresholds can be deceiving. Still, while raw power isn’t the whole story, it’s a must for heavy-duty jobs. This model might struggle with rust-encrusted bolts or lug nuts on heavy off-road vehicles.

The price is also a little higher than competitors like the Craftsman C3 or the Ryobi P1883. If you don’t have other DeWalt 20-volt MAX System tools, the dual batteries are a plus. Otherwise, you’ll save by forgoing the kit and purchasing the bare tool only.

How does DeWalt’s impact wrench compare to models from Milwaukee, Ryobi, Ingersoll Rand and Bosch?

The DeWalt’s closest competitors are the Ryobi P1883, the Craftsman C3 and the Bosch IDH182-02. They’re similar in function and features, but both Bosch and DeWalt carry generous three-year warranties — Ryobi and Craftsman offer one year. Bosch also uses quieter brushless motors that run cooler, so they last longer while the DeWalt line has more finesse than power.

Battery systems are comparable among all brands, and they’re much more durable than those made just a few years ago, but Ryobi and DeWalt offer more tools with interchangeable batteries. Milwaukee and Craftsman are still catching up.

Ingersoll Rand and Milwaukee both make tools for the home market, but they concentrate more on higher-end models for professionals with a little more to spend. They can’t be beaten for torque, but they cost more, and their lower-priced offerings lack the convenience features popular among occasional users.

What do users say?

The word “perfect” comes up repeatedly in reviews for the DeWalt DCF880HM2. Users who previously struggled with impact wrenches so bulky they were hard to use say Goldilocks would be proud of this model — it’s just right. Despite the higher price, most characterize it as a great value, and they appreciate that the kit comes with two batteries.

Complaints about the DCF880HM2 are rare, but the lower torque is shocking for pros accustomed to the power of pneumatic impact wrenches. Before you buy, consider what you need an impact wrench to do — despite the latest technology, no cordless model is as powerful as an air-driven version.

Why work harder around the house than you have to when the DeWalt DCF880HM2 20-volt 1/2-inch Max Lithium-ion Impact Wrench puts professional power in your hands? It’s an investment you won’t regret.