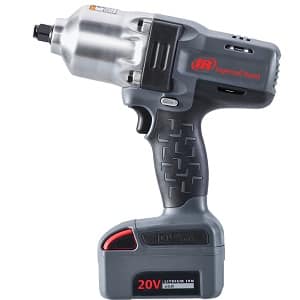 One of the best impact wrench for automotive applications is the Ingersoll Rand 1/2″ High-Torque Impact Wrench Kit. This review should provide you with all the details to help you decide whether an investment in this brand is worth your time.

So what’s to like about Ingersoll Rand Impact Wrench Kit?

The cordless impact wrench from Ingersoll Rand is one of the few battery powered impact wrenches that can go toe to toe with air powered counterparts. It’s a high-torque tool capable of delivering up to 1,100 foot pounds of torque. It’s durable, blow molded construction means that mechanics can put the hurt on it without worrying about it breaking.

Just like your aluminum or steel air powered tools, the W7150-K2 can withstand pretty much anything you can throw at it. It features a half inch driver, weighs in at about 6.8 pounds, and the freedom to use it anywhere you want without the restriction of hoses or air pressure.

Q: The marketing says 1,100 foot pounds of torque but the wrench is rated at 780 foot pounds. What gives?

A: The 1,100 number listed in the marketing is not pure wrench torque but the metric bolt torque. In other words, this is the torque value the wrench can unlock by repeatedly “shocking” the bolt.

Q: Is this impact wrench overkill for a casual home user?

A: If you work on your car occasionally then yes this would be overkill for you.

Q: Can exhaust bolts in decent condition be removed with this wrench?

A: It can be tricky to say whether any wrench can get a bolt out. The age of the bolt, the torque rating that was applied the last time the bolt as driven in, and any corrosion on the bolt will all influence how difficult it will be to get the bolt out. Even traditional air powered tools don’t have enough power to remove rusted bolts.

The freedom of the cordless impact wrench is the real benefit and there are plenty of applications in the automotive world where this wrench can work well. An air tool should always be kept on standby if and when you need it but the cordless version can take over a lot of jobs.

For the home user, this wrench is way more than you need. Unless you’re doing a few mechanic jobs on your car each month, it’s not really worth the investment.

So what does this cordless impact wrench come packing with?

This wrench weighs in at a hefty 15 pounds which is super beefy for a cordless drill. It features variable speed of 1900 RPMs, 780 foot pounds of torque, a half inch square driver, and is powered by one lithium ion battery. The unit comes with its own charger and comes with a one year warranty.

Aside from the power and convenience, this torque wrench has some pretty handy features. The battery indicator light for example is extremely helpful. Four LED lights built into the battery show you a range of percentages of battery life.

The motor features a rare-earth magnet actuated by a variable speed trigger for maximum power. It’s also an extremely comfortable drill to use with an ergonomic, soft touch handle.

The W1750-K20 is a very sensitive piece of equipment that needs proper maintenance over time for continued performance. For every 8 hours of use, you should lubricate the drill using Ingersoll Rand brand lubrication.

Note that any replacement parts should be genuine Ingersoll Rand parts to ensure that the drill operates properly.

There are a lot of genuine Ingersoll brand accessories to enhance and protect your impact wrench:

Who’s this impact wrench perfect for?

While anyone can purchase and use this wrench, it’s typically an investment that should only be made by a select few. Mechanics or other professionals in similar fields are pretty much the best customers to be purchasing a driver of this caliber. The tool is heavy duty and meant to be used on a daily basis for heavy work.

One of the main things I did not like about this wrench is that it stopped working properly after about one year of use. It would go forward but not reverse.

When the drill was working, the torque rating left a lot to be desired. It sounds like in the marketing that the wrench is top notch and can handle anything when in reality it struggles with some really basic bolts like on car wheels or just simple unrusted bolts.

Comparing with the Competition

The Makita is a slightly lower end impact wrench compared with the Ingersoll Rand. For example it only delivers 325 foot pounds of torque compared to the Rand’s 780. It’s also about half the price which sort of puts it in a different class. The Makita is definitely more of a wrench for the casual user.

The DEWALT DCF899B is also less expensive than the Ingersoll brand but it’s up there with similar features. It delivers about 700 foot pounds of torque (only 80 less than Ingersoll). It also has some extra features like LED light, Battery fuel gauge, and a 3 speed selector switch. Overall it’s a good alternative to the more expensive Ingersoll brand.

What do users say about this Impact wrench?

On Amazon, users have rated the W1750-K20 an overall 4.5 out of 5 stars. Many of the main complaints are that the impact wrench has stopped working or had some kind of issue after about a year of use.

On a positive note, many user report loving the freedom of having a cordless impact wrench. It is easier to deploy on a job and easier to get into tight spots which is crucial in the automotive world.

If you are in the market for a cordless impact wrench or maybe you want to try one for the first time, the Ingersoll Rand W1750-K20 is a perfect unit to start with. It’s reasonably priced and has some high-quality features that make it ideal for the mechanic.