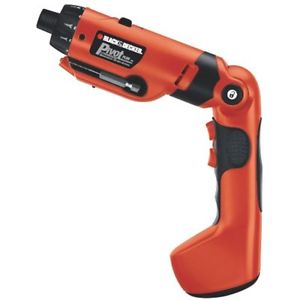 The PD600 Pivot Plus 6-Volt Nicad Screwdriver from Black & Decker is a compact yet powerful tool. It offers an option between a lower-speed setting for driving with 80 inch/pounds of torque and a high-speed drilling power with 40 inch/pounds of torque. With this 3-position screwdriver and drill, you will have all the comfort and convenience necessary to get the job done.

Question: For how long will a fully-charged battery last?
Answer: It will last approximately 45 minutes.

Question: Does this screwdriver come with any bits?
Answer: Yes. There are two standard screw driving bits included. Other bits of varying sizes can be bought in boxed sets or individually at very little cost.

Question: Is this drill a good choice for light crafting projects?
Answer: Yes. It is definitely a good option for that.

Question: Are the bits for this screwdriver magnetic?
Answer: No they are not; however, there is a light on the end of the screwdriver that assists in offsetting that non feature.

The convenience and comfort of the Black & Decker PD600 are just some of its impressive traits. This tool delivers multiple features in a single, compact, easy-to-grip device. It can comfortably fit into the kitchen drawer; however, it packs the on-board features and power to undertake projects all around the home. There is no need to haul out the tool box when taking on tasks like decorating, hanging pictures, making over a room or installing blinds with this remarkably handy tool. You can even work in the dark as the light on the front of tool will illuminate dark work areas. The pivoting action of the PD600 offers maximum flexibility to access small, awkward spaces.

This impressive tool provides the opportunity to drill holes at high speed and drive in lower speed. Work surfaces are illuminated by the integrated LED light and its quick release mechanism stops bits from becoming loose. The automatic spindle can be locked for manual use to provide greater control when starting and finishing. Reverse and forward rocker switch makes it easy to switch from removing screws to screw driving.

As was previously mentioned, the PD600 provides an option between a lower-speed setting for driving with 80 inch/pounds of torque and a high-speed drilling power with 40 inch/pounds of torque. This compact and handy drill/driver features an ergonomically-shaped body to make gripping easier. Its handle locks in three positions to create versatile operating conditions. There is an integrated LED light designed for greater visibility in dark areas and its 23-position clutch assists in preventing stripping. It is equipped with a 6-volt battery that delivers an extended operating life. In addition, there is a rapid-release mechanism in the head of the tool that makes it fast, easy and secure to change bits.

If the tool is not being used for a long period, the battery should be taken out to preserve the life of the battery.

The accessories included with the Black and Decker PD600 Pivot Plus are the charger and two 2-inch Hex-Shank Screwdriving Bits.

Who can use this cordless screwdriver?

This cordless screwdriver is not designed for commercial use. It is ideal for light duty drilling applications and all screw-related projects. The tool can be used for a variety of projects around the home. These could include hanging pictures, furniture assembly, mounting of decorative and storage shelving and installation of window coverings like mini blinds.

There is not much to dislike about this powerful and compact tool, except that over time, the battery tends to lose its re-chargeability as the driver is used.

How does this cordless screwdriver compare to other comparable drivers?

The three-position pivoting action of the Black & Decker tool provides maximum flexibility for small, tight areas. It will deliver more power than the standard screwdriver in its category and deliver superior drilling power. The grip of the Bosch is ergonomic and comfortable; therefore, it is easier to hold throughout the day, while getting the job done and without causing pain in the arm or waist. Additionally, two batteries are included with this tool unlike the single one that is available with the PD600; this allows for better work flow. Its charge time is short its run time is long; however, the warranty on the tool is only a year as opposed to the 2 years offered on the PD600. The price of the Bosch is also higher than other models and you have to buy bits separately

In many cordless screwdriver reviews, Makita DF010DSE has the highest test results for the best build, features and performance. The most impressive features of this powerful cordless screwdriver are its hefty amount of torque and its 7.2-volt lithium-ion battery. There is also the option of choosing between two speeds of 650 or 200 RPM depending on the project you are working on. Unlike the Black & Decker PD600 23-position clutch, the Makita DF010DSE only has 21 clutch settings.

According to various cordless screwdriver reviews, in comparison to the Black & Decker PD600 Pivot Plus 6-Volt Screwdrider, the Dewalt Gyroscopic Screwdriver is quite strong and sophisticated. However, it is slightly heavier and more expensive than the competition. Nevertheless, it stands out in many reviews as the most reliable, most advanced and best cordless screwdriver of them all.

What do users say about this cordless screwdriver?

In a number of cordless screwdriver reviews, the response to the Black & Decker PD600 Pivot Plus has been overwhelmingly positive. Many individuals are impressed by the power packed in its small size. One user declared that his disability has resulted in him having problems with his hands, which makes it challenging for him to even hold a screwdriver. However, he stated that this power screwdriver is robust enough to make it easier for him to hold than regular screwdrivers. He finds that it works well and he has been able to complete many projects himself instead of needing to hire someone else to do them.

There is not much else to desire from this little powerhouse; it is remarkable what the manufacturer has engineered into this system. Its dual-speed range enables drilling holes at high speed and driving screws at the slower speed. Additionally, its 23-position clutch is the same as what is on much bigger versions and it will safeguard against stripping the screws. In contrast to regular power drills and traditional cordless screwdrivers, the handle of the PD600 locks easily in three positions, making it ideal for awkward spaces and tight areas. For the price, there is virtually nothing else like it.